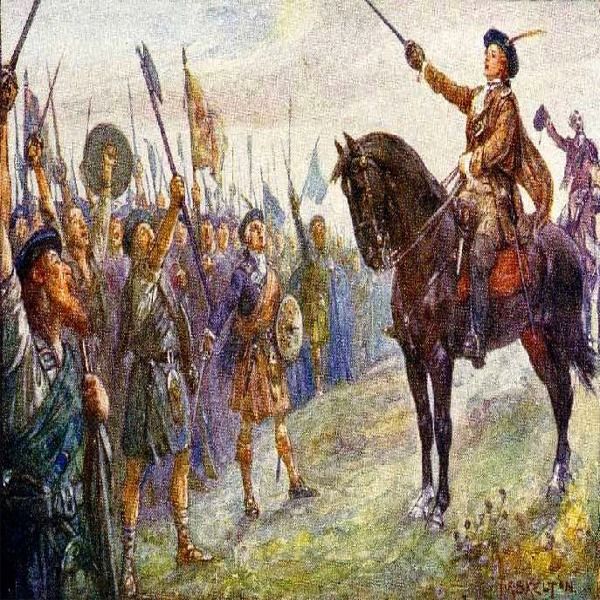 Cam ye o'er frae France? is a Scots mocking folk song from the time of the Jacobite Revolution in the 18th century.

After the death of Queen Anne the British crown passed on to George, the Elector of Hanover. In his entourage George I brought with him a number of German courtiers, including his mistress Melusine von der Schulenburg, whom he later created the Duchess of Kendal (known as the Goose) and his half-sister Sophia von Kielmansegg (commonly referred to as the Sow). George I's wife Sophia Dorothea of Celle remained in Hanover, imprisoned at Ahlden House after her affair with Philip Christoph von Königsmarck ? the blade in the song. Another historic personality in the song is John Erskine, Earl of Mar (Bobbing John) who recruited in the Scottish Highlands for the Jacobite cause. The nickname Geordie Whelps is a reference to the House of Welf, the original line of the House of Hanover.

Geordie, he's a man there is little doubt o't;
He's done a' he can, wha can do without it?
Down there came a blade linkin' like my lordie;
He wad drive a trade at the loom o' Geordie.

Though the claith were bad, blythly may we niffer;
Gin we get a wab, it makes little differ.
We hae tint our plaid, bannet, belt and swordie,
Ha's and mailins braid?but we hae a Geordie!

Jocky's gane to France and Montgomery's lady;
There they'll learn to dance: Madam, are ye ready?
They'll be back belyve belted, brisk and lordly;
Brawly may they thrive to dance a jig wi' Geordie!

Hey for Sandy Don! Hey for Cockolorum!
Hey for Bobbing John and his Highland Quorum!
Mony a sword and lance swings at Highland hurdie;
How they'll skip and dance o'er the bum o' Geordie!