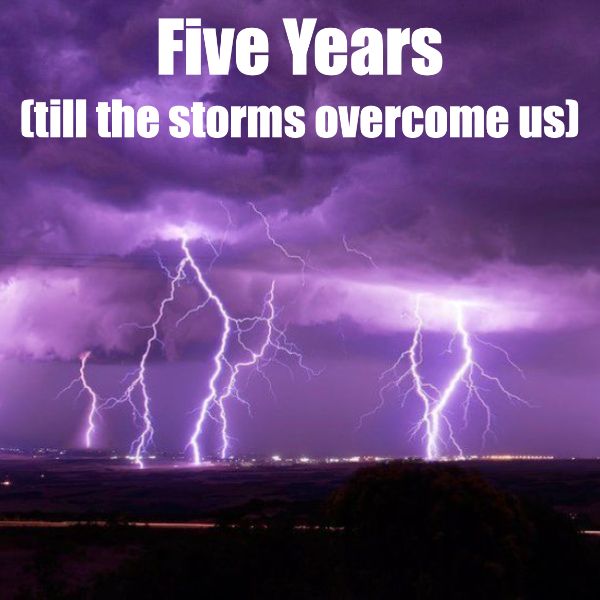 Fire in the night
A Hole in the Sky

Five Years (till the storms overcome us)

Five. Years. The song FIVE YEARS (till the storms overcome us) is a transatlantic collaboration in which a devastating future of destruction due to climate change is foretold.

We have already begun to see the effects  of climate change driving storm cycles to produce once-in-a-thousand year size storms multiple times in the last ten years alone. The glaciers are now melting faster then scientists predicted and with a few more years of deforestation in Brazil the Amazon rainforest, the earth's primary natural defense system regarding climate change will be reduced to a mere savannah unable to filter carbon emissions and releasing untold additional amounts of CO2 stored in its forests. As Franklin states "we've got five years so take out the forests - we don't need them when we've got the madness."

The song Five Years echoes the concept of David Bowie's song of the same name from the iconic album The Rise and Fall of Ziggy Stardust and the Spiders from Mars. Bowie's song written and released in 1972, 50 years ago, was based on fiction. The song said that "earth was really dying" however there was no real mention of how or why - just the statement that the "news had just come over." Today we find ourselves in a wholly different set of circumstances. Sure it can be said that the world will not simply end in five years but the new cycle of storms and record temperatures is already causing the great forests of the American west to burn incessantly and here and elsewhere across the globe, multiple swaths of land are turning into barren drought wastelands of desert unable to sustain crops to feed local farmers and their neighbors.

The climate change theme of the lyrics is matched to a dystopian feel from the music, which uses Phrygian, Lydian, and diminished modalities, and the relentless drums and percussion.

The song is finalized just as severe and deadly heatwaves move across Europe causing forests to burst into flames forcing thousands to evacuate their homes. Scientists indicate this is a trend that will continue to get worse and worse. Perhaps we don't have five years after all...

Many thanks to Kelly Miller for his ideas and for help selecting samples. Thanks also to Robert Clausen for suggesting production ideas for the music.

FIVE YEARS (til the storms overcome us)

Unfortunately this is only the beginning as we fail to curb carbon emissions
And the planet warms and the storms come to overwhelm us
In five years time, who can survive?