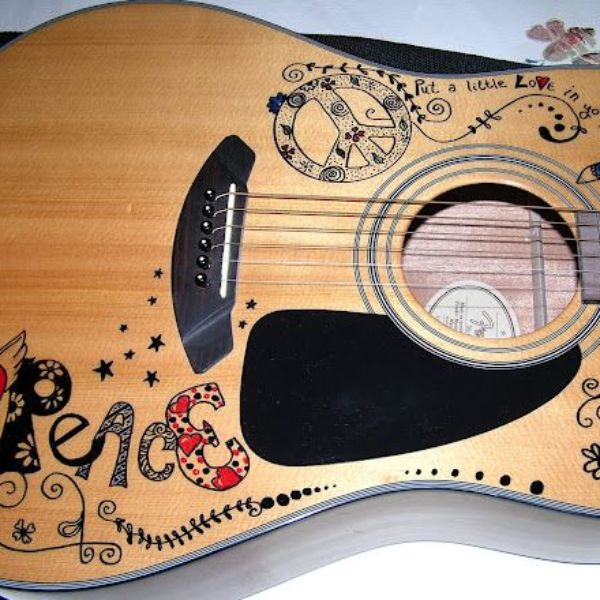 Life is full of funny incidents, some real some "made up", this is pure fiction!
Written in September 2016 after a recent move to Kansas City, I was getting a lot of Blues and Jazz influences locally.
Woke up one morning and this just poured out. I had been hitting Garage Sales trying to decorate my new home.
The idea of finding an old Martin guitar cheap hit me and then the idea of breaking up with a girlfriend because I bought struck me as funny.
So the song began, the bullet hole struck me as appropriate for the breakup!
I was playing some local open mics looking for other musicians and some feedback so that went in.
As it evolved I realized it was more about not letting "the breakup blues" take over and keep you from moving forward.
PolkaDaddy is Chino Ace from Israel and his contribution musically is astounding, I asked for the Dixieland sound and he nailed it. Kudos Chino!

We broke up at a garage sale I was out of control
I bought an old guitar with a bullet hole
going all the way through, right where my heart would be
It was a D28 from 1953

I headed to a bar, I was feeling pretty low
I found an bag of weed and a gram of blow
In the guitar case, in a little sack
There was an open mic going on in the back

I listened for a bit and then I signed the sheet
Pulled out that old guitar, you know it sounded so sweet
I played some songs I knew, from 1932
Depression era music that was dark and blue

I got down off the stage and headed to the back
Stepped into the alley with my gunny sack
I rolled a joint and shared it with the others there
Pretty soon I really didn?t have a care

A player from the bar came with his standup bass
And people started dancing all over the place
We were rocking out, it was a magic zone
When I spotted a young lady who was all alone

I handed off the Martin, jumped down off the stage
I walked right up to her and started to engage her
In a conversation about the silvery Moon
It was a warm summer night in the middle of June

This song started out as the Garage Sale Blues
But that old guitar it really changed my views
It helped to have a drink and some songs to play
It helped to meet somebody else that very same day?.

So if you ever breakup, don?t you despair
Just take a walk downtown and breath that city air
Where there?s a party going on or an open bar
And don?t forget to drag along your old guitar!

And if you?re feeling blue it?s just a state mind
Trust me there is someone out there you will find
Who is looking for someone just like you
You?ve been here before, so you know it?s true

Don?t let the blues take over and bring you down
There?s lots of things to do in this big old town
Just pick yourself up and put a smile on your face
And you?ll find friendly people all over the place